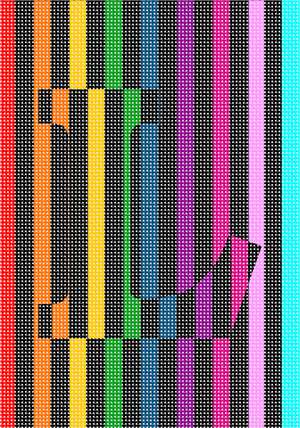 The letter L as an illusion. We have many designs in our "illusion" series. They are colorful and easy to stitch. This is a perfect design for a beginner. It is available in all 26 letters of the alphabet. Buy the kit, or just the plain canvas if you have lots of threads in your stash. If stripes are your thing, chances are that you have a strong sense of self-worth. It is considered as a staple of business wear; a preference for vertical stripes means that you are likely a go-getter. ... Stripes are also known for their slimming feel. Wear what you want: scientific proof that horizontal stripes don't make you look fatter. It's a commonly held belief that wearing clothes with horizontal stripes will make you look fatter. However, adding horizontal stripes to shapes like rectangles makes them look thinner, a phenomenon known as the Helmholtz illusion. About 100 languages use the same alphabet like in English which makes it one of the most widely used alphabets in the world. While some languages have a few more and others a few less, they all share the 23 core letters originally found in the Roman alphabet. The most commonly used letter is the letter E. The letter J was the most recent letter to be added to the alphabet, appearing in print as a distinct letter for the first time in 1633. A sentence which contains all 26 letters of the English alphabet is called a pangram. A famous pangram is: “The quick brown fox jumps over the lazy dog.” but there are even shorter ones such as: “Pack my box with five dozen liquor jugs.” Every letter of the alphabet has a wild, or at least interesting, story, often going back thousands of years. You can look it up on Wikipedia.